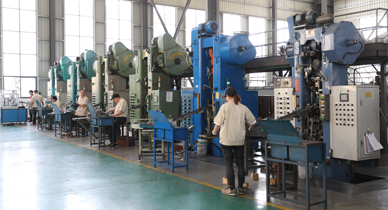 Material The main difference between sintered mechanical part materials and ordinary casting and forging materials is that the density of the former is a controllable variable; under the condition that the chemical composition and microstructure of the two are approximately the same, the mechanical properties of the former are a function of its density. Another important factor that affects its mechanical properties is alloying elements. The most commonly used alloying elements in iron-based sintered materials are carbon, copper, nickel, and molybdenum. Carbon can be used alone or in combination with other elements (especially copper). It is mainly used to improve the strength and hardness of iron-based sintered materials; the common feature of copper, nickel, and molybdenum is that the affinity for oxygen is smaller than that of iron, so those containing these elements The alloy powder body can be sintered in the atmosphere of general sintering of pure iron.

The density of the Custom Pulley Powder Metal parts, the size, shape and distribution of the pores, and the degree of sintering have a significant impact on the mechanical properties of the sintered mechanical parts (see powder metallurgy sintering). Depending on the density of the material, the tensile strength of sintered carbon steel is 11-42kgf/mm, which can be increased to over 63kgf/mm after heat treatment. The tensile strength of sintered copper steel is 14～57kgf/mm, and it can reach more than 70kgf/mm after heat treatment. The tensile strength of sintered brass is 28kgf/mm. Generally, the tensile strength of sintered aluminum alloy is 10～35kgf/mm. Sintered materials have low ductility and impact toughness due to the presence of residual porosity (typically 5-25%). Although the pore morphology and quantity are changed through repressing, re-sintering, infiltration, and subsequent heat treatment, the mechanical properties, especially fatigue strength, impact toughness, and ductility can be improved, but the corresponding properties of cast and forged materials are still not achieved. Therefore, the application range of sintered mechanical parts is limited. However, the use of sintering method to produce mechanical parts, compared with parts produced by casting, forging, and machining methods, has the advantages of energy saving, fewer processing procedures, high material utilization, uniform dimensional accuracy, and suitable for mass automated production. , The scope of application has been expanding.
Powder sintering forging The combination of powder metallurgy forming and forging is an important development in the manufacturing process of sintered mechanical parts. The process is to first use powder metallurgy to make metal powder into preforms, and then forging and other processes to make parts, so that the porosity of the sintered material can be reduced to less than 2%, and the physical and mechanical properties are improved to close to the corresponding The level of casting and forging materials has expanded the application range of sintered mechanical parts.